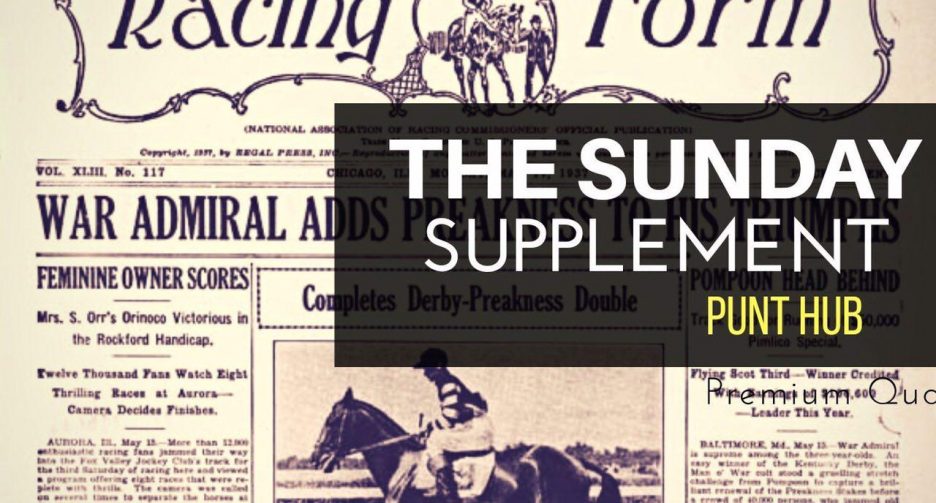 Good Morning!
Welcome to The Sunday Supplement by PuntHub.

A weekly roundup of all Punthub tipsters. The Supplement runs Saturday To Friday, meaning Yesterday is the start of next week’s roundup.

One new service joins us for December, looking to impress with tipping prowess.

His name is Alex and he deals solely in USA Racing.
Selections generally sent in 2 messages, the first generally sent between 4.30-.5.30pm.
We’ve monitored Alex selections for a few weeks now and are happy to introduce him as our latest free trial.

Stats for the new service are as follows:

Onwards with our weekly overview..

The Trader
Nine Winners this week and a hefty one to get him going back in the right direction. La Couer Neta 2.75-point winner at Ffos Las. Happy News overshadowing them all though with a massive 18-point winner at Ludlow.

A difficult service to judge as he attempts to highlight money horses, but an 18/1 winner not to be sniffed at. Let’s hope for more.

The Lowdown
Five winners this week and a good start to the month for The Lowdown. Calivigny the pick of the bunch returning 5 points profit at Ayr.

Its a strong end to the month and a good Start to December. Finishing up the month with a 5.21 after dropping as -16 is a good achievement. Hopefully December can show how solid the service really is!

You can join the trial here.

Top of The Pops
Wasn’t a great end to the month for TOTP (how long since you saw that!) but a great start to December with one winner from one bet. Whatharm on target adding 4 points profit.

Really wasn’t a great month for TOTP with -12 for November, but the solid start to December is hopefully a sign of the month were going to have!

High Five
No bets this week. Theres nothing wrong with being selective at a time which makes and breaks a lot of tipsters.
—
You can join the above free services here
—
Lay 2 Liability
Seven “bets” and six “winners” make for an 85% strike rate and a small profit so far this month. At this early stage in the month its fair for me to say I’m very optimistic that December will be a much better month after an incredibly difficult and challenging November.

Taylor Made
Six winners this week and a slow start to the month for Taylor Made after a massive 70+ point profit last month. Zanahiyr returned 3.99 points and Central City added another 5.1 points profit.
Not got out of the blocks the way he’d have wanted at just -3 so far for the month but its very early on in December and we’ve got plenty of the month left.

Wedge Winners
Twenty-Six winners this week and a profit so far this month for Wedge Winners as he looks to return to form after the wheels somewhat wobbled last month. Hear No Evil knocked in 11 points profit at Ayr. Bold Plan also worthy of a mention returning 8 points at Exeter (2 points staked).

10 points doesn’t sound like much when you’ve had 26 winners in a week. But the key takeaway is that at this early point in December, Wedge Winners is in profit and hopefully there to stay.

(THE REAL) HRN
Eight winners this week from 56 staked at the start of December. Some big winners in there but not enough to keep HRN from slipping to -18. Whiteoak Fleur a 14-point winner at Sedgefield and Can’t Stop Now returning 16 points at Fakenham (2 points staked).

HRN deliberately looks for bigger value. This has been the M.O of the service from day one. And with the average odds at 12.54 its much much higher than the 10.98 average. Some of these bigger priced selection go in and it’ll make -18 look like nothing.

Home Form
No bets this week. This weekends selections released to paying members & the free telgeram group as a taster.

The Master Plan
I’m really really surprised at how many have taken up TMP since we’ve started mentioning it more. It’s had well deserved mentions in our Wednesday and Friday updates.

It was a great end to November with 19.08 points profit from 69 staked and an ROI of 27.65% to show for it. The strike rate settled well above average at 26.09%. But its not been the best of starts this month with -3 so far for December, Miranda the only winner worth a mention adding 3 points at Ludlow.

So what’s to watch?
The Master Plan– you’ll be sick of reading about it by now but TMP did really well last month and I honestly think that it should be talked about way more than what it gets. A steady return last month of 19.08 from 69 staked made for a solid ROI. Alright its -3 right now but its a marathon not a sprint!  The Master Plan is really good value, take a look here and get involved.

The Lowdown– a strong end to the month combined with a solid start to December and a big comeback after dropping as low as -16 in his first month on trial. Andy will be happy about the turnaround and confident of a big step forward this month.

It’s a free trial and you can track its progress via our results page and get the tips by joining the list here.

—
Winner of the Week Is-
Giving it to a free service is a rarity with how competitive the premium tipsters are but The Trader has snuck in and knocked it from the big guns with Happy News returning 18 points profit at Ludlow.

—
A note from the author
Amazing to see Gorsjean make it out of the car relatively ok last week, that was rather scary.
Interesting to se George Russell take his opportunity this weekend, stepping in for Lewis.
The horse will have already bolted by the time you read this but I’ve had a small bet on Verstappen to qualify on pole, and another small on him to win the race.

Russell is fav for qualifying having topped the time sheets in P1 & 2. But actually Bottas is faster. I think Verstappen may nick it though.

Some great racing over the weekend, Altior not running has caused a stir but I think its the right thing to do, horses welfare comes first.
Good luck to all for the week ahead.
–
If anyone has any questions or wants to join our chat community you’re more than welcome.Be nice, say hi.
https://t.me/joinchat/BrXH9RdduZx7GB0q0TSaDw
—
At PuntHub we love feedback – so please let us know what you think by replying to this email!If you’d rather it be anonymous you can use the contact form. I promise we don’t bite.