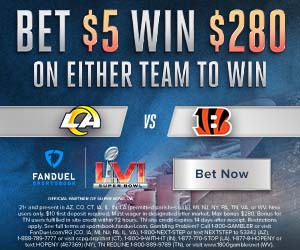 The long-rumored move of guard James Harden from the Brooklyn Nets to the Philadelphia 76ers finally came to fruition on Thursday.

It was a hefty price to pay for a player who’s never won an NBA title in his career. Can Harden prove to be the difference maker for Philly?

Odds as of February 10th at FanDuel Sportsbook

Oddsmakers are liking his chances. Right away, the 76ers saw their NBA title odds shorten to +650. Philadelphia was idling at an average betting line of +2200 in the NBA championship odds prior to this transaction.

The marriage between Harden and the Nets that was supposed to bring the team a first NBA title ended in a messy divorce after barely more than a year.

Harden was pushing hard to get out of Brooklyn and to Philly – just as last season he worked to get himself out of Houston. The big three of Harden, Kevin Durant and Kyrie Irving was supposed to push the Nets over the top. Instead, it was a ongoing battle to keep all three of these veterans healthy and on the floor together.

Currently out with a hamstring injury, Harden, 32, has missed 10 games this season. Last season, he played just 44 of 82 games.

In 13 NBA seasons, Harden has reached the NBA Finals on one occasion. That was in his third season with the Oklahoma City Thunder. They lost the 2012 final to the Miami Heat.

Interestingly, even without Harden, the Nets remain the +420 chalk to be 2021-22 NBA champions.

How Does Harden Fit With 76ers?

One factor that Harden should bring to Philly that the Sixers have certainly been shown to be lacking in the past is a reliable late-game scoring threat from the backcourt. Harden will deliver that option.

Philly has been seeking to add an All-Star guard to the lineup for quite some time. Harden might not be the same guy who won three straight scoring titles from 2017-18 through 2019-20 but he’s still a deadly threat with the ball in his hands.

Perhaps the biggest question will be how quickly Harden can mesh his game with the style of Sixers all-star center Joel Embiid? An old-school traditional post-up player, Embiid doesn’t roll to the rim with the ball the way the majority of centers who’ve played with Harden do.

Is It a Title-Winning Move for Philly?

On paper, adding a seven-time all-star and former NBA MVP looks like, pardon the pun, a slam dunk. However, Harden’s history suggests otherwise.

His defensive shortcomings won’t help a Sixers club that already is wanting on that side of the basketball. In Curry, the Sixers are surrendering one of the best 3-points shooters in the NBA.

It was Philly GM Daryl Morey – the guy who brought Harden to Houston when he was GM of the Rockets – who engineered this deal. He better than anyone should know that piecing a puzzle together involving Harden is a challenge.

James Harden really begged midseason, to be traded from a team that has Kevin Durant & Kyrie Irving. We’ve never seen a player this committed to losing. He’s generational.

Since 2016, Harden has been teamed up with NBA stars Dwight Howard, Chris Paul, Russell Westbrook, Durant and Irving. And he’s till without a championship ring.

On his end, Harden orchestrated this move. Even though he’s been good for 22.5 points per game and 10.2 assists per game, Harden is enduring his worst season statistically in a decade.

He’d better hope this works out. Philly fans are not very, shall we say, forgiving. Harden’s past, though, is suggesting that it won’t.