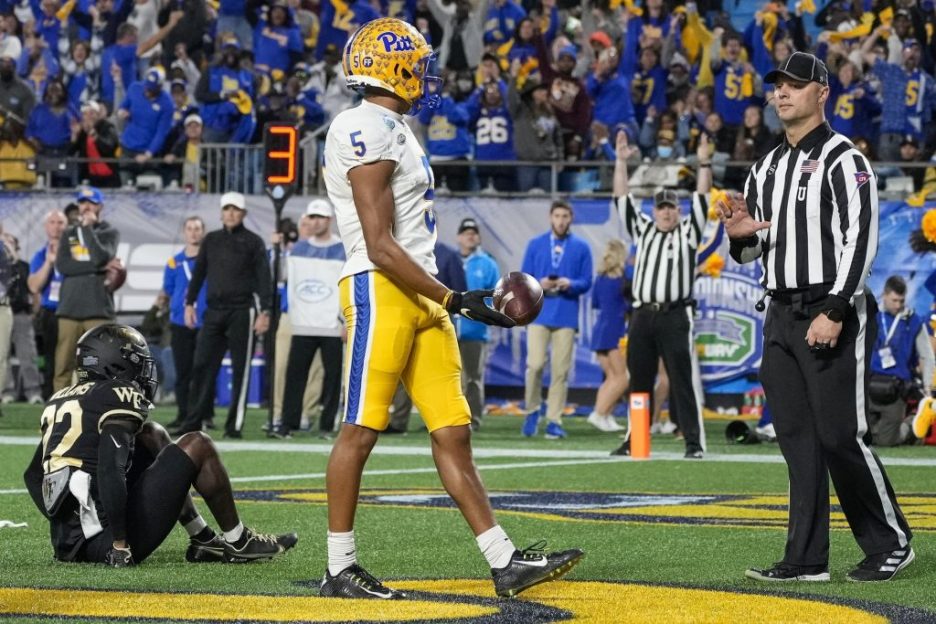 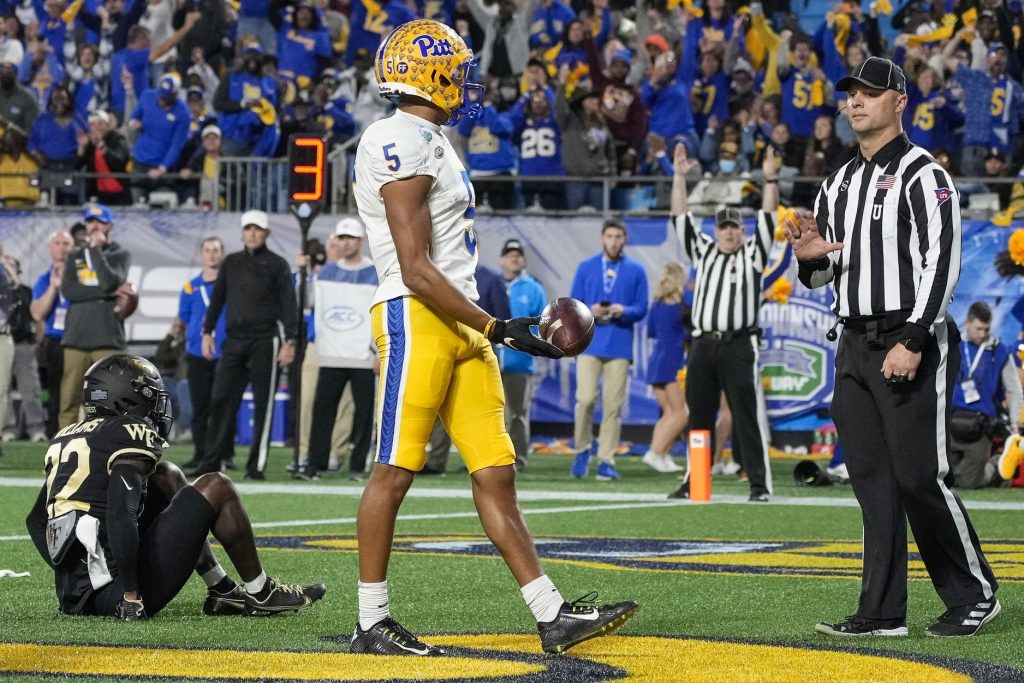 The 2021 ACC championship game was the first since 2014 that did not include Clemson. It was also the first since 2008 that did not include either Clemson or Florida State. Kenny Pickett and the Pittsburgh Panthers took home the title in convincing fashion against the Wake Forest Demon Deacons in what was the first conference championship for the Coastal Division since 2010. While Pickett is still in Pittsburgh playing in Heinz, I mean, Acrisure Stadium, he is not with the Panthers – so the 2022 ACC title game is bound to look different once again.

The race for the Atlantic Division should be more entertaining than the odds depict. Clemson is the favorite at -220 per FanDuel, but the Tigers replaced both its offensive and defensive coordinators after former-OC Tony Elliot (Virginia) and former-DC Brent Venables (Oklahoma) took head coaching positions at other Power 5 programs. Clemson will hope for better quarterback play this season, but its defense has the makings of being a top 3, if not the best, defense in the country. The Tigers’ biggest threat within the division will be North Carolina State, who has one of the best quarterbacks in the conference to go along with a defense that could be as good as top 10 in the country. The Wolfpack returns quite a bit of starters from last year’s squad that won 9 games, and they are projected to have an elite defense with high-level production from the linebacker position.

They are not favored as heavily as Clemson in the Atlantic, but FanDuel lists the Miami Hurricanes as +125 favorites to win the Coastal Division. Miami hired Mario Cristobal away from Oregon in an attempt to get the program back to its dominant form of the ’80s after a list of failed coaching hires since Larry Coker in 2006. Coach Cristobal will have his work cut out for him building this roster, but will have a promising young quarterback in Tyler Van Dyke running the offense. Virginia and Virginia Tech also welcome new coaches, while North Carolina and Pitt will look for replacements for program-great quarterbacks in Sam Howell and Pickett.

Read our College Football National Championship preview, including a +8000 longshot

Unsurprisingly, FanDuel lists Clemson as a -155 favorite not just to win the Atlantic Division, but to win the ACC as a whole. Behind the Tigers sits Miami at +500, which seems a bit low, and North Carolina State at +800. It is odd to see the Wolfpack behind the Hurricanes on the odds board, but when factoring in how much of a favorite Clemson is to win the Atlantic Division – I suppose it makes some sense. Behind NC State is Pitt at +1000, which is the fourth and final team that has odds under 20/1 to win the conference.

As I touched on earlier, the Panthers are without first-team All-ACC quarterback Kenny Pickett after he was drafted by the Steelers with the 20th pick in the NFL Draft. In addition to the void that will be left by Pickett, Pitt will have to replace the 2021 Biletnikoff Award winner, wide receiver Jordan Addison – who transferred to USC to play for the Trojans (and maximize his NIL earnings), and offensive coordinator Mark Whipple (Nebraska). That is a lot to replace from last year’s conference championship team, but there is reason to be optimistic about the 2022 season.

The offense will undoubtedly look different in Pittsburgh, as coach Pat Narduzzi hired Frank Cignetti to replace Whipple as the offensive coordinator. Cignetti is a very experienced offensive mind, having spent time in the NFL and at other NCAA programs as a quarterbacks coach and offensive coordinator. Most recently, Cignetti comes to Pitt from ACC foe, Boston College – who received good contributions from its offensive line and running back last season. As you would expect, Cignetti will deploy a pro-style, run-heavy offense at Pitt – which is quite the difference from Whipple’s pass-heavy offense that loved to take shots down the field.

While this change in offensive philosophy will be an adjustment for the Panthers, the offensive line should be more than capable of excelling in this scheme. The line returns all 5 offensive starters from last year’s unit, which ranked 19th in average line yards per carry, 24th in opportunity rate, 41st in stuff rate, and 60th in power success rate. The offense also returns running backs Israel Abanikanda and Rodney Hammond, Jr, both of whom logged at least 100 carries, averaged at least 5.0 yards per carry, and showed the ability to catch passes out of the backfield.

It is not easy to replace a first-round quarterback at any program, and it is even more difficult at a program like Pitt. However, coach Narduzzi could have done much worse replacing Pickett. In comes Keldon Slovis from USC, who is an experienced starter at the Power 5 level. In his freshman season, Slovis was thrown into the fire when then-Trojan starter JT Daniels went down with a season-ending knee injury in Week 1. Slovis went on to lead the Trojans to an 8-4 record while throwing for 3,502 yards and 30 touchdowns with a completion percentage of 71.9 and just 9 interceptions. He won the Pac-12 Freshman of the Year that season. In the COVID-19-shortened 2020 season, Slovis led the Trojans to 3 come-from-behind wins in the first 3 games en route to a perfect 5-0 regular season before losing the Pac-12 title game to Oregon.

Last year was Slovis’ worst season with USC, but his woes could be attributed to poor all-around play from the offense. Slovis will not have Addison to target in Pittsburgh, but he will have two talented, big-bodied pass-catchers returning in Jared Wayne and Gavin Bartholomew – who combined for 75 receptions, 984 yards, and 10 touchdowns. The Panthers also welcome transfers Konata Mumpfield (751 yards, 8 TDs, and Freshman All-American) from Akron and Bub Means from Louisiana Tech to help fill Addison’s void.

There are fewer questions about the Pitt defense this season, which is ultimately why I believe the Panthers will win the division. They return 6 all-ACC selections to their defense, which ranked 2nd nationally in sacks and 4th-down defense, 4th in defensive touchdowns, and 6th in run defense last season. The line is the strength of the defense and will be one of the conference’s, if not the entire nation’s, best units with 6 redshirt seniors and 2 redshirt juniors among the top 8 in the depth chart. For reference, projected starters Calijah Kancey, Habakkuk Baldonado, David Green, and Deslin Alexandre combined for 34 tackles for loss and 20 sacks in 2021. Senior linebacker SirVocea Dennis returns after posting 82 total tackles, 10 tackles for loss, and 4 sacks to lead a somewhat inexperienced linebacking core around him after Cam Bright transferred to Washington. Shayne Simon transferred in from Notre Dame and is talented, but is unproven due to injury. Lastly, the secondary returns 3 starters from a unit that left something to be desired. I expect this to be a focal point for improvement from coach Narduzzi this offseason.

The ACC Coastal is one of the Power 5’s worst football divisions year in and year out, and this year could be more of the same with 3 new head coaches and two elite quarterbacks gone to the NFL. Miami being the favorite makes sense with the hype surrounding Mario Cristobal and the brand of “The U.” However, Pitt has a much easier schedule than the Hurricanes, as the Panthers will not have to play Clemson or Florida State. Their most difficult conference game projects to be their road game at Miami in the last week of the season, which could be the deciding factor in who represents the Coastal in Charlotte this year. Other than that, the Panthers have just 1 road back-to-back (Louisville and UNC) and welcome West Virginia, Georgia Tech, Virginia Tech, Syracuse, and Duke to Pittsburgh for 5 extremely winnable games.

I want to point out that I think Dave Clausen is a great coach that has shown the ability to develop talent, and new defensive coordinator Brad Lambert should help improve a defense that ranked 88th in scoring, 91st in total defense, and 92nd in opposing yards per play. Also, Sam Hartman has proven he is a great college quarterback that understands and operates this RPO offense well. However, I cannot help but think Wake Forest will regress slightly in 2022. Hartman put up monster numbers, but ACC defenses figured him out later in the season. Through the first 8 weeks, he threw just 3 interceptions. In the last 4 regular season games and the conference title game, he threw 11 interceptions. Defensively, the Demon Deacons should be better under Lambert – but that is not saying much.

In an attempt to keep this one short, sweet, and to the point – this is a play on Wake Forest’s schedule and the idea of regression back to the mean. Last season, the Demon Deacons won 11 games, but their post-game win expectancy was around 7.5 – meaning they had some luck go their way in high-variance games. Back-to-back 3-point wins against Louisville and Syracuse highlight this argument, with a 3-point win over a banged-up NC State in there as well. Looking at this season’s schedule, Wake Forest should start with a win against VMI before traveling to Vanderbilt for a true non-conference road game. Vanderbilt is Vanderbilt, but it is still an SEC team, and it is still a road test for the Demon Deacons. They should win that game, but they will not out-class Vanderbilt with speed and strength.

Then, Wake Forest hosts Liberty who will be replacing Malik Willis at quarterback. All things considered, Wake should be 3-0 at this point. Then the going gets tough for the Demon Deacons. Wake Forest hosts Clemson and then travels to Tallahassee to play Florida State in back-to-back weeks. After those two difficult conference games, they will have to play Army at home – a team that runs the option offense that we all know to be so difficult for which to prepare. Wake Forest beat Army last season, but it did not come easily as the ‘Deac’s allowed Army to score 56 points. A bye week follows the Army game, then Wake Forest hosts Boston College before going on the road in back-to-back weeks to play Louisville and NC State. The Demon Deacons then play North Carolina and Syracuse at home, before ending the year with Duke on the road.

In order for Wake Forest to beat an under on 8.5 wins, they will have to beat 3 of Clemson, Florida State, Army, Louisville, and NC State – assuming they take care of business against the other teams that they are capable of beating. That could be a massive assumption considering Wake Forest needed overtime to beat Syracuse last year and struggled with Army despite that game coming after a bye week.

Wake Forest will have some weeks in which its offense looks unstoppable, but expect defenses to have a better game plan for Hartman and force him to make more contested throws. An improvement on defense is likely coming, but I am not sure it will be enough to get Wake Forest to 9 wins.

The post 2022 ACC Football Conference Season Preview and Best Bets: Will Clemson return back to the top? appeared first on Pickswise.